Somebody shoot me if I ever even consider something this ridiculous:
This is the part when my sweet husband would insert a Hampden-Sydney joke. :)
Posted by Kristin at 1:28 PM 1 comment:

At 18 months, Jackson was a very sick little boy. And I was far too busy taking care of him to post anything about this milestone. But we have kissed sickness goodbye and have some fun things to share. 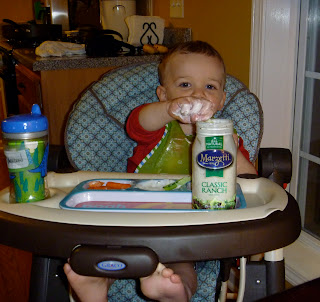 ~The kid loves to eat.~
He will eat almost anything we put in front of him. I got the "all clear" from the pediatrician to introduce peanut butter. And have mercy, that kid will just eat it by the spoonfuls. Opa Radtke hooked us up with great coupons for {FREE!} Marzetti dressing. I mean, who eats carrots and cucumbers naked? And I'm just going to say it, Jackson is a cheese snob. I blame his paternal grandmother for this. She was born and raised in Wisconsin. I think she has whispered in his ear many times since birth, "Wisconsin White Cheddar...Wisconsin White Cheddar..." If you even try to give Jackson a slice of Kraft cheese he will hand it right back to you with a sincere look that says, "Try that again and I'll never speak to you again. Ever." 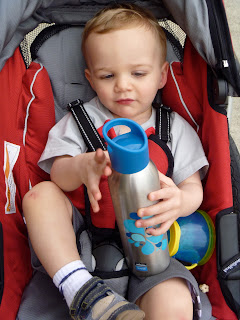 
~He loves to read. The Dinosaur series by Jane Yolen is absolutely one of his favorites.~ 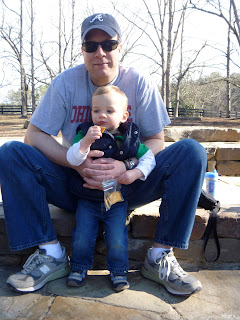 Like an alarm clock, every day at 6pm, Jackson begins to ask for "Daddy." And when he hears the key in the front door it is squeals, giggles and "Daaaaddyyyy!"

Have a great week everybody!
Posted by Kristin at 8:54 PM 2 comments:

It's amazing to me that via this "thing" called a blog that you can find "someone" who you can relate to - who you may have never met, and who most likely you won't meet on this side of heaven.

Among the blogs on the sidebar is one called Baby Bangs. Like me, she's a Mama who loves living life with her kids and doesn't feel the need to post every day. {Her firstborn also happens to be named Jackson.} :) When she does post, it's worth the time to read her thoughts. Today's post hit me upside the head.


In recent weeks I have been stunned by the behavior of people who seem to use you for your experience and knowledge and then drop you once you've given them what they want. I have asked myself repeatedly why such behavior bothers me so much or why am I so sensitive to it. And similarly to the post, I have begged the Lord to "Please, just give me thicker skin!"
But, the Lord has not justified my thoughts, or given me thicker skin. He's asked to me to forgive them...and move on. As I studied Isaiah this week, he brought to mind this verse:

"Forget the former things;
do not dwell on the past.
See, I am doing a new thing!"
{Isaiah 43.18-19}
If I keep holding on to the past, I'm going to miss the chance to be obedient and forgive and then see the "new thing" the Lord has in store for me next. And I simply do not want to miss anything the Lord has to show me.
Posted by Kristin at 2:34 PM 2 comments:

With Weather This Nice...

Who wants to be indoors?
Not us! 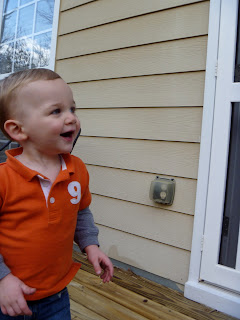 The sun warmed our back deck and
made it the perfect place to play. 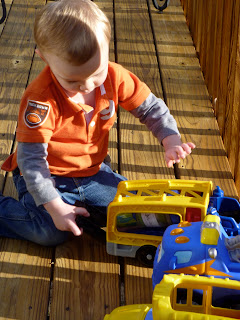 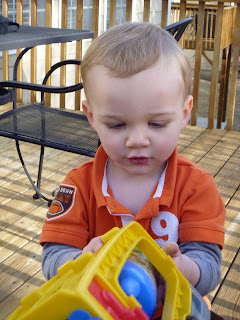 It's also the perfect place to see the planes. 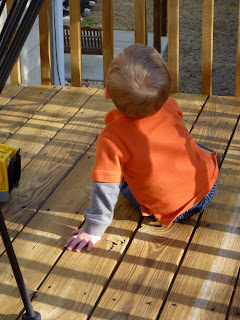 Whew, after all this playing we need some water. :) 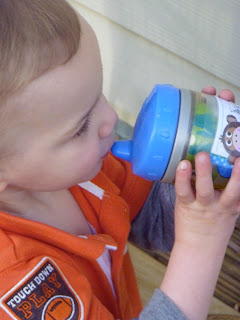 We hope you had a good day too! 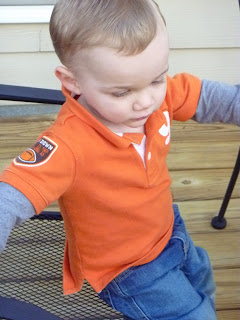 Posted by Kristin at 9:09 PM No comments:

To the Mamas out there, this video will be worth your time (3min 45sec) and give you a bit of laughter and pause...

I needed the laughter after having a very sick little boy here for several days.

Which one was your favorite?