An Incredible Thought for Today

“Many Christian parents, myself included, tend to speak to children as though they were Pharisees. We can speak harshly and with judgment, implying by our manner that their hearts are hard and resistant...

But this attitude is not justified by Scripture.

...There is no record of Jesus ever speaking to a a child in a harsh tone. When the Gospels record Him speaking to a child, it is always with gentleness.

Our children are not our adversaries.

...Though our children’s hearts are corrupted by sin, they are not hardened sinners who have made conscious choices to reject the Savior. Our children are simply immature and childish. That’s why children need love and compassion, not harshness and guilt.”
{emphasis mine}

This quote has blessed me beyond measure as I begin the journey of parenting. I pray that does for you too.
Posted by Kristin at 2:03 PM 1 comment:

There's a little boy in this house who turned 16 months old today. While that may seem like just another month gone by to some, it was a day of fun for him. Why? You ask. Well, because we had our first craft today. 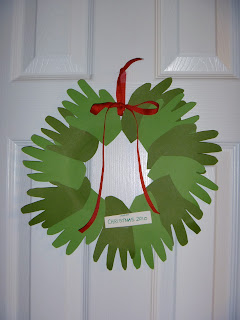 Now don't freak out. No, Jack did not handle scissors today. But he did sit while I traced his hands. And let me tell you, having this little whipper snapper SIT STILL for more than a minute is celebration. 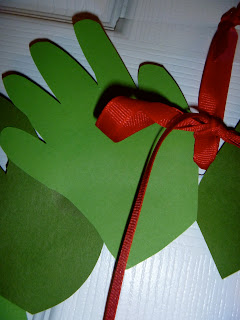 He was quite silly during the tracing. I think it tickled his fingers. While I cut out each hand, he colored happily. After I finished cutting out each handprint, he "helped" me place each hand on the wreath and glue it. {Dear Elmers (& Crayola), Thank you for being "non-toxic".} After the tying of the ribbon I asked him where he wanted to hang it. The pantry door was chosen. 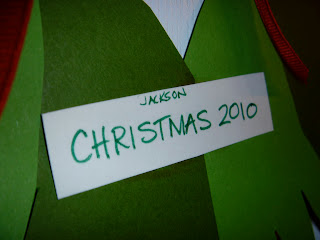 When I reflect on this first project, I am filled with anticipation. Not only is this the first of many projects, but the first of many handprint wreaths. I intend to keep them and pull them out each year as we make a new one. It will be special ten years from now to compare his hands to this first wreath.

I would love to hear what Christmas projects you and your children do.

Enjoy this time of year - and remember...it's ALL about Christ.
Posted by Kristin at 9:57 PM 2 comments:

Each week Jack has a playdate with his buddy Elijah. Elijah's mama, Julia, is one of my dearest friends. Today she captured the boys playing with her video camera and then made it into a movie preview. Enjoy!

From Griffin, GA to Columbus, OH

Well, it's been a "few" days since I have had a moment to sit down at the computer. Thanksgiving was a week of activity that had us traveling from the warm south to the chilly north.

Our first Thanksgiving celebration was with our dear friends, the Harwells. They are more than friends, they are adopted family. Jeremy & Karrie have three of the coolest kids. Big Jack, Katherine, and Sam delight Jackson each time we visit. And he is stuffed full of love by the time we leave.

In addition to the friendships we have with these dear friends, we love going to their house for a visit. They have a charming farmhouse on ACRES of land. So, rather than having to walk sideways in our backyard, Jack can run like a crazy man as far as his little legs will let him. And he did. He played on the swingset, he jumped on the trampoline, he climbed a bale of hay and he even got Sam and Katherine to push him in a cool car around the property. He played so hard. And that night, he slept...HARD.

Tuesday, Jack and I boarded a plane for Columbus. Trip had driven up on Monday. Anybody want to guess who got the better end of that deal? {Ahem.} Ever tried to wrestle a cat? No? Well, imagine traveling with an active 15mo boy on an airplane, seated in a center seat...picturing it? Yeah. Let's just say, by the time we landed I was EXHAUSTED.

But then we were with family and the drama of a flight was a distant memory. Our visit to the Radtke Compound was filled with more playing on ACRES of land.

Friday, while the rest of the world was in a frenzy to find a "Black Friday" deal, Jackson headed to the barber shop. And not just any barber shop. The barber shop where Mr. Tom works. Mr. Tom is a very special person to Trip's family. He has cut the hair and whiskers of Great Grandpa Miller, Great Grandpa Radtke, Opa Radtke, Trip, Uncle Brendan and Uncle Nels. And now, a fourth generation has had the privilege of sitting in Mr. Tom's chair.
Or so we thought. Mr. Tom pulled a fast one on Mommy and whipped out the mousse. And have mercy, he gelled my baby's front hairs. My heart did a flip flop, but Jack thought that was the funniest thing...EVER.

Amidst all the activity and fun, Trip and I stopped to thank God for this past year. We are blessed by our Heavenly Father and are truly thankful each day for what He has entrusted to us. May we never take a day for granted.
Posted by Kristin at 12:15 AM No comments: