2. Did you keep your New Year's resolutions, and will you make more for next year?
Last year I said that my resolution was to give birth to Henry because
otherwise the Lord and I were going to have a serious conversation
if I was still pregnant today. I'm happy to say I kept that resolution..ha!

3. Did anyone close to you die?


Well, while I never got to meet Carter, I felt close to he and his family as we passionately prayed for the Lord to heal him. We even led Jackson nightly in prayers for that precious family. However, that was not God's plan for him. In August he went to be with Jesus. Tears still well up in my eyes as I think about him not being with his family here on earth. Cancer, particularly childhood cancer, sucks.

4. What would you like to have in 2013 that you lacked in 2012?
Balance.
Figuring out how to juggle each of my roles and to do each one graciously.

5. What dates from 2012 will remain etched upon your memory, and why?

6. Compared to this time last year, are you:
~Happier or sadder?
Happier! While this season is crazy busy in our family, we have such joy in Henry's added presence and Trip's healing.

7. What song will always remind you of 2012?
Matt Redman's "Never Once".
The lyrics: "Standing on this mountaintop, looking just how far we've come, knowing that for every step you were with us" will forever be a testimony to our family of ALL that the Lord did on our behalf in 2012.

8. What were your favorite books of the year?

I did two bible studies in 2012 that rocked my world. James, by Beth Moore and Nehemiah by Kelly Minter.

9. What was your favorite TV show?

Parenthood is still my absolute favorite show, but a new one that I picked up in the fall was Elementary. It's a modern spin on Sherlock Holmes. It's fantastic.

It's hard to pick one lesson that the Lord revealed to me since every day He was teaching me so much in what our family experienced. But, one lesson that I will never forget is to be generous in whatever ways you can to others. I was blown away by the generosity of friends who came alongside our family and gave time, energy, money, food, etc to us following Trip's recovery and then the birth of Henry. There were days I would just weep in gratitude. That season of incredible need has passed on our family and I am continually asking the Lord to show me where I can be generous in His name. I cannot imagine being the recipient of so many blessings and not earnestly seeking to respond similarly to others. 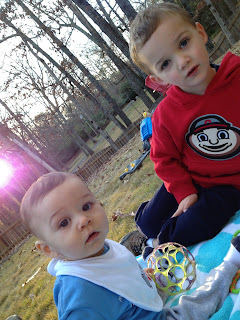 For anyone who has met Jackson, you know he is an active little boy. The boy is ALWAYS on the move. We play outside every day. Unless it is pouring, we are outside. We have a great backyard for boys. We have fort, sandbox, soccer goal, etc. But what we lack is yardage. I have spent many an afternoon "racing" Jack fence to fence just so that kid can burn some energy.

Lately, with the weather being so weepy, playing outside for hours has been limited. Even if it's not raining, the ground is too soaked to play. So, I have had to get creative so that Jackson will burn off that energy and go to sleep at night.

I had thought while pregnant that I would be able to push both of my guys in a stroller, but Jackson is just too tall for any stroller. His legs were dangling off the front and in danger of getting caught in the front wheel or dragging the ground. {And to be honest, it just looks weird to push a kid whose 41.5in tall.} But what I have discovered is that Jackson would much prefer to run alongside me while I push Henry in the stroller.

We got him some sweet kicks and we run. A lot.

We have several parks nearby that have great trails for running. So, we go and that kid just runs wild and free and then sleeps HARD that night.

The funny for today is Jackson's conversation with a sweet elderly couple yesterday.

One trail that we run regularly has 1/10mi markers. Since his greatest joy is to be faster than me, I let him run ahead to each marker and then stop and wait for me. While waiting for me to catch up the elderly couple stopped to talk to him. I wasn't but a few feet from him but this is what I heard:

Couple: Well, hello young man!
Jackson: Hi!
Couple: Have you been running this entire trail?
Jackson: Yes. I love running. I'm really fast. But my Mama likes to take me here, because it wears me out.

As I approached them, I lowered my sunglasses and said: "Guilty as charged." They just couldn't stop laughing. "Keep on Mama, Keep on."

Today Henry celebrated turning 7 months by hearing our favorite pediatrician say: "Both ears are clear!" Thank goodness. The past two weeks of ear infections and a sneaky cold have been sad for Henry. Saaad. 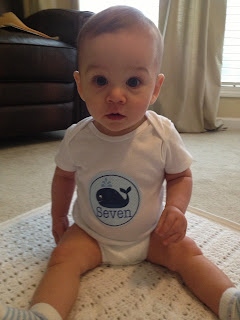 This past month allowed Henry to celebrate his first Christmas and learn to sit all by himself. He is quite excited about this new way of sitting. However, while sitting upright is fun, it has not stopped his efforts to learn to crawl. He has gotten up on his knees many times while playing and just rocked back and forth. I can just hear his brain, "Alright...now what?! There just has to be more!" 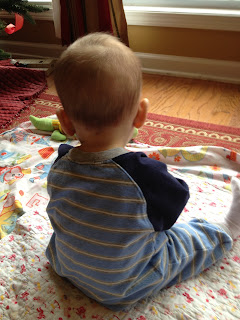 I love the back of his head. 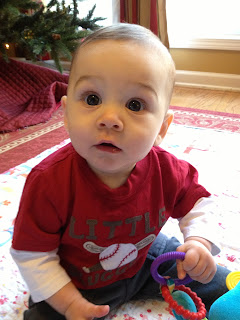 I love his big eyes. I think they are going to stay brown. {Yay!} 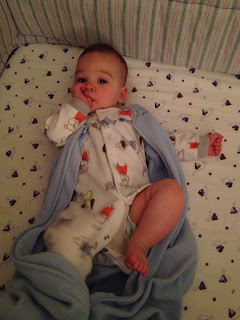 This is how I find Henry most mornings. Do not ask me how he does it, but if the sleeper has snaps, he will find a way to get his leg{s} out of it by morning. We keep the boys rooms cool since it promotes great sleep. But apparently it's not cool enough for this little boy. 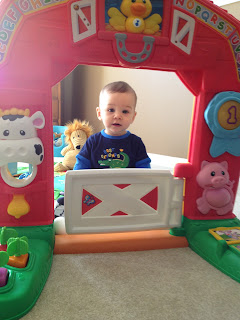 Farmer Henry!
A special new toy for Henry. However, big brother
thinks he should have plenty of playtime with it too! 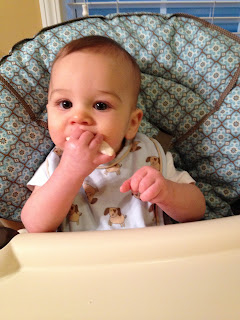 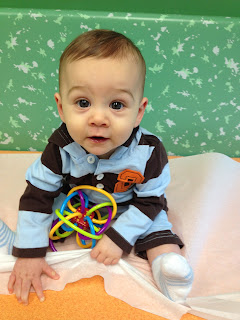 Seeing Dr. Silverman today and getting the good news about his ears. 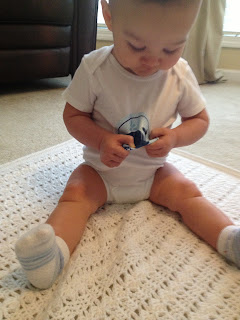 And this is Henry's new way of telling me that
the monthly photo sessions are over.
"Yes, dear."

Henry, you are such a joy to our family. We were so excited to celebrate your first Christmas in our family. What we pray each day is that they Savior whose birth we celebrated would become the central part of your life even as a little boy. You are loved, sweet boy. Happy 7 months!
Posted by Kristin at 4:49 PM No comments: