One more month and there will be a candle on a cake.

But before I start freaking out about what is yet to come, I'll look back and savor this past month. This month was such a fun month for Henry. 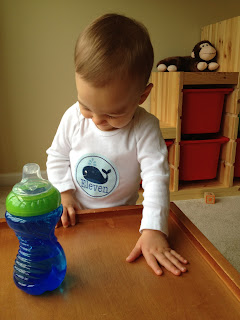 He is a funny kid with a temperament that we have all fallen in love with. And he's tough. His big brother has yet to master the term "gentle", but Henry doesn't care. Whatever Jackson has typically done invites giggles from Henry. And as he attempts to cruise, Henry has learned that falling is no fun. But he rarely cries. He simply looks for confirmation from one of us: "yes, I bet that did hurt, but oh! you're such a big boy!" and gets back up.

He is truly learning to play. I noticed at the beginning of this month that he loves to drive the cars around the playroom. He goes from one side of the room to the other just driving whichever car grabbed his interest. There is also a Thomas set that has mesmerized him. He has finally learned how to place Thomas on the mountain so that the train car moves down the track. And he plays with that toy over and over and over.... 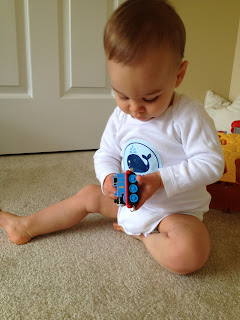 The biggest change for Henry this month was his HAIR. Sweet baby had an old man combover. It was a mess.

Trip kept teasing me:
"Don't you love him? I mean, look at him...he looks like we don't know what a barber is for..."


Oh for the love.

It wasn't that I didn't know the direct route to the boys' barber, it's just that...well...I knew I'd be a mess cutting my not-even-one-year-old's hair. I knew the minute that combover was gone he would look older. I mean the days of him being my baby are passing too quickly. Now I'm going to fast forward the process by having his hair cut?! 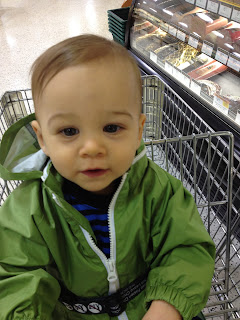 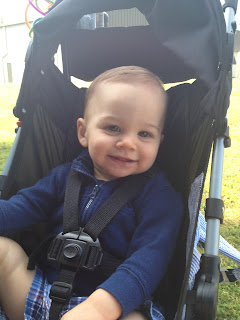